At the bottom of the hill where the present castle of Vaulx is located, are the remains of the old castle; rectangular building identified by a pointed arched bay as the old castle chapel.

According to Courtepée, the fief would have belonged to a Choiseul family (whose deformation of the name would have given "Chizeuil"), but a local historian, J. Rondet, author of a work on the canton of Charolles, gives another version of the history of this stronghold. The two came together in the 15th century, when the stronghold moved to Damascus of Anlezy and Thianges.

During the revolution, the castle was dismantled. In the 19th century, it was rebuilt by the Geoffray family at the top of the hill on the site of an old building believed to date from the 16th century. 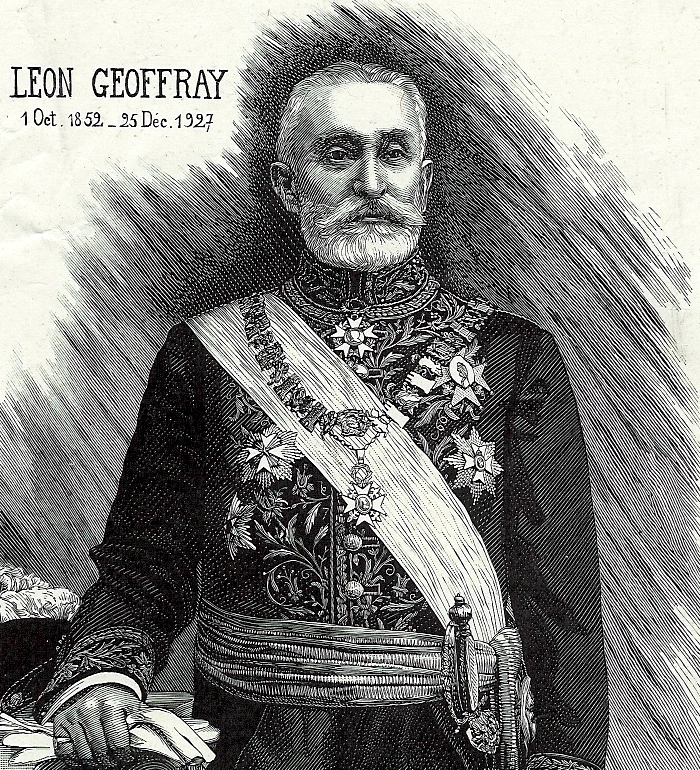 Léon Geoffray, born in 1852, died in 1927, is a French diplomat at the origin of the Entente Cordiale, then French Ambassador in Madrid.

Léon Marcel Isidore Geoffray was born in Passy (since annexed to Paris) on October 1, 1852. His father, Pierre-Joseph Geoffray (1804-1886), owner, is a former financier in Lyon where he ran “a major silk house”. Her mother, née Juliette (known as Julie) Joséphine Sauvage de La Martinière, is renowned for her piety and generosity.

Young Léon and his brother Marcel were educated in Passy by their mother, with a tutor, Mr. Caillet. The program followed and the daily schedule are those of the Lycée Louis-le-Grand.

Léon Geoffray then studied law, obtained a doctorate in law by defending a thesis on emphyteusis, published in 1875. Lawyer at the Paris Court of Appeal, he chose to enter a diplomatic career and succeeded "brilliantly" the Foreign Affairs competition.

Léon Geoffray was appointed first counselor at the London embassy, ​​from 1895, with the rank of secretary first class, then minister plenipotentiary in 1896. He noted there a very anti-French state of mind; he gives an account of it in his reports, and writes on August 9, 1898, at the time of the French occupation of Fachoda:

“We tell ourselves that the French are the born adversary of England (...) So that, without wishing for an armed conflict with our country, a certain part of the English nation gets used to the idea that this conflict may burst one day, and even that it will not fail to burst.”

But he devoted himself passionately to appeasement, and to the achievement of an alliance between England and France. To achieve this, despite the Fachoda crisis, he did not hesitate to repeatedly shuttle between the two countries to convince both his hierarchical superior Paul Cambon, quickly convinced, his minister Théophile Delcasse, the British government and the French government. He prepares and accompanies the respective visits of Edward VII to Paris, and of President Loubet to London. He thus actively participated in the creation and maintenance of the Entente Cordiale, signed in 1904.

When he left London in 1908, Edward VII exceptionally presented him with the insignia of the Grand Cross of the Order of Victoria, which had never been presented to a minister plenipotentiary. Léon Geoffray then left for Cairo, where he was consul general from 1908 to 1910. 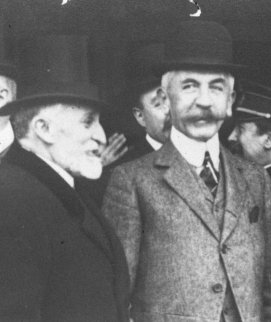 In July 1910 he was appointed French Ambassador to Madrid to King Alfonso XIII. He then helps to ensure France's neutrality from Spain, which rejects offers from Germany. But in October 1917 he was dismissed from his post, following the crisis in Franco-Spanish relations.

Léon Geoffray died in Paris on December 25, 1927. He is buried in the cemetery of Passy.

He was the owner of the Château des Vaulx (17th century) in Saint-Julien-de-Civry in Saône-et-Loire. Geometric, the construction consists of a rectangular main building flanked by four square towers on the main facade and a round tower on the other facade, and connected to the outbuildings transformed into residential space. Léon Geoffray called on the famous landscaper Achille Duchêne around 1900 to develop the park of the castle. Very prolific, Duchêne worked locally at Digoine and at the Château de la Verrerie (Le Creusot). The development of the park of Vaulx is particularly interesting, because it consists in the staging of the surrounding landscape through perspectives created by terraces or large alleys.

His private correspondence, notably with Lyautey, was preempted in 1994 by the Ministry of Foreign Affairs.

I was taken here as a surprise by my fiancé on our way back from a holiday in the Alps. The chateau is superb. We had the apartment to ourselves so had the choice of 4 beds! The attention to detail is excellent and our hosts were incredibly friendly and helpful. We enjoyed walking around the grounds and taking in the beautiful views across the French countryside whilst we enjoyed our breakfast. I can't recommend Chateau de Vaulx enough, it's so romantic - I'm hoping we'll get a chance to return soon.

We have 42 guests and no members online