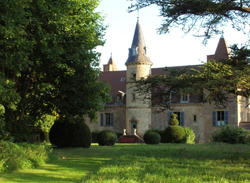 In 1886, a local historian described the château de Vaulx in the following words:

Well-proportioned, elegant in its simplicity, located in the most beautiful position on hilltop, its main facade faces south. From this vantage point, we enjoy a pleasant vista across a vast stretch of the region : Saint-Julien de Civry, Dyo, Saint Germain, Amanzé and beyond, as far as you can see, the blue mountains, including the old Dun. a panorama as vast as diversified.

Today, luckily enough, the scenery is still the same. The house has grown with two wings on the east and west sides by Léon Geoffray  at the end of the 19th century.

The castle of Vaulx de Chizeul lies between the Charolais and the Brionnais. This castle was built in the 14th century and was the house of a very famous French family, the de Choiseul, until 1435. The name "de Chizeul" is a distortion of the family name.

Since 1471, the landlords of Vaux were the Damas family, a well known Burgundy family, one of whose branches was called Damas de Vaux. The castle, fortress, hamlets and lands stayed in the Damas family until 1793, for more than three centuries. 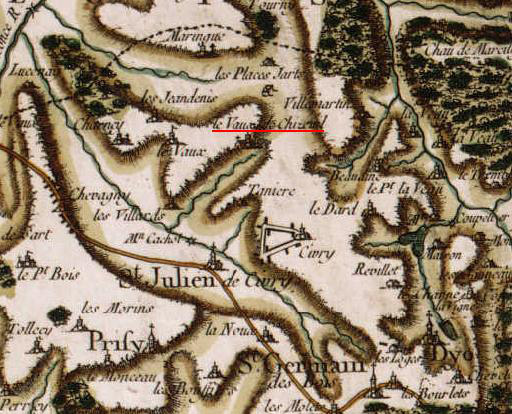 The castle had a dominant position in the region. It size was huge (91 meters by 29 meters) and included a square dungeon, the lord residence, a storehouse and a jail.

The castle was damaged during the wars of religion in the 16th century and in 1793, when it was sold as a national property because the family emigrated during the French revolution. The only remains are a ruin which was probably the prison.

200 metres from the old castle of Vaulx de Chizeul stands the current château de Vaulx. It used to be the house of the main officers and administrators of the estate. The role of the administrators was very important as the Damas family did not live full time in Vaulx, being either in Paris or in Dyo castle, another land they owned in the region. Part of the existing Vaulx castle dates back to the 16th century, as indicated by stones dated 1563 on the façade, The castle has been modified and expanded until the beginning of the 20th century. In the 19th century, the castle was the property of the Geoffray family, and in particular Léon Geoffray (1852-1927) who was French Ambassador in Spain and one of the key contributors to the reconciliation of United Kingdom and France before World War I. 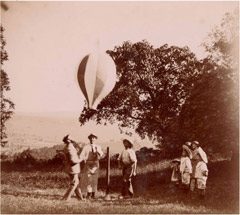 What more could you ask for?

Everything about Marty and the chateau is expansive and spectacularly memorable, and the love and flair with which he and Thierry have restored, decorated and furnished their home is heart-warming, as is the generosity with which they share it. The far-reaching views from their hill-top avenue are glorious: it would be very tempting to return and see their wonderful garden and grounds in all

the different seasons. Add to that a charming landscape dotted with mellow old villages and Romanesque churches, grazed by Charolais cattle and alive with birdsong: what more could you ask for?

Like being in your own chateau this beautiful place offers both luxury and cosiness. The food is homemade in the beautiful kitchen by Marty. The living room and dining room are everything you would wish for in a Chateau, but without being stiff. We stayed in the room Mello, which was beautiful and very good value for money. The food is like food should be, simple, tasty and delicious :-) The three small dogs sleeping in the kitchen are adorable.

What a find this place was!

We loved the Chateau de Vaulx. Located in the Charolais-Brionnais region of France, this wonderfully funky chateau is a perfect place for a romantic getaway. Still in the process of being restored, the available rooms are very large and clean with wonderfully updated bath facilities. We stayed in "La chambre Duchêne" which was very nice. Marty, the host and co-owner, is delightful and so willing to

explain the history of the Chateau and the restoration process. The scenery from the grounds was breathtaking, even on a rainy spring day. We would also recommend table d'hôtes -- Marty is an excellent cook -- with dinner served in the dining room with other guests. We thoroughly enjoyed sharing our meal with a delightful Dutch family. Breakfast is also served in the dining room and was very good.

We have 220 guests and no members online